This is a link to an interesting blog by Simon Horobin, Professor of English Language and Literature at the University of Oxford. He is exploring the uneasy relationship between traditional grammar (based on Latin) and the ways in which we actually use language. 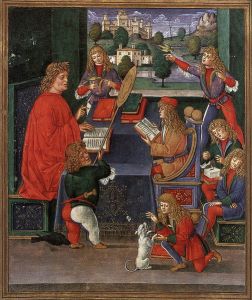 English, and some of the effects this has had. His article addresses:

The blog ends with a grammar test that appeared in The Telegraph.

Can you tell the difference?

Can you tell the difference between a verbal noun (gerund) and a present participle? And does it matter? Look at the examples below to see what you think …

The children are cooking breakfast because it’s my birthday.

Cooking is an important part of family life.

Look if you want to know more …

In each case here, ‘cooking’ has the same form, but is performing a different function.

In the first example, ‘cooking’ is a non-finite verb (present participle) which is post-modifying the adjective ‘busy’. It is part of the adjective phrase ‘busy cooking for tomorrow’.

In the second example, ‘cooking’ is functioning as the head of the post-modified noun phrase ‘cooking for special occasions’. It is in the object site of the sentence and is a verbal noun.

In the third example, ‘cooking’ is a non-finite verb (present participle). It is functioning as the lexical verb in the progressive verb phrase ‘are cooking’.

In the final example, ‘cooking’ is functioning as the head of a simple noun phrase. It is in the subject site of the sentence and is a verbal noun.

We don’t need this knowledge to understand any of the sentences, but it can be useful in linguistic analysis to recognise the different grammatical functions of a word. It certainly helps us work out the connections between groups of words – and that is important when we need to know where phrases start and stop!

How many ‘likes’ have you used today?

The like test – do you know you’re saying it?

The colloquial use of like in informal situations is pervasive – try counting how many the people around you use and you’ll find its frequency is high. The question is whether speakers are aware that they are using like – if you don’t know you’re saying it, then you won’t be able to choose alternatives in a formal situation!

And now for the grammatical explanations …

The word like is very versatile: it can be found in different positions in a sentence and it does different jobs.

Earthquakes cause devastation, destruction, pain, suffering and the like.

i.e. resembling something that has already been mentioned

Do you have any particular likes and dislikes?

i.e. things that are preferred (usually in plural)

i.e. the act of showing support for or approval of something posted on the internet by clicking ‘like’

You shouldn’t hang around with the likes of them.

i.e. such a person or thing (colloquial, now usually derogatory)

i.e. what sort of person (expects description in response rather than a comparison)

In the summer, the children all like ice-creams and going to the beach.

i.e. to find something enjoyable (transitive – followed by an object usually in the form of a noun or a present participle)

We always like to run early on Saturday morning.

i.e. to do something as a regular habit (transitive – followed by an object usually in the form of an infinitive)

I should like to know whether the essays need to be uploaded with the application form.

i.e. conditional, implying that the question has no obvious answer

Have you liked the photo of the baby on Stacey’s facebook page?

i.e. the act of registering one’s support for or approval of a post on the internet

A mathematician like you will never be misled by statistics in the news.

The girl’s eyes shone like sapphires caught in moonlight.

i.e. in the same manner as (simile)

So far, so good. The usage of like in each of the examples above is standard. We can add to this list a number of idiomatic expressions:

She looks like a runner. (i.e. to have the appearance of being)

He feels like a take-away tonight. (i.e. to have an inclination for something, colloquial)

I want you to sort out all your computer junk, your old files and the like. (formula to avoid further listing of similar items)

Oh come on. Don’t be like that. (i.e. stop behaving in a negative way)

The essay requires polish, good editing if you like, before it will be ready for submission. (i.e. suggesting something with which others may disagree, formal)

You can borrow my coat if you like. (i.e. making a casual suggestion or an offer)

He’d do it like a shot if he was asked. (i.e. quickly, colloquial)

I was digging like crazy all day. (i.e. in the manner of someone who is crazy)

From here on, we’re venturing into increasingly informal territory – examples of like that linguistic traditionalists may well describe as ‘vulgar’, but which have a high frequency in casual spoken interactions, particularly among young people. You can often trace the origins to American English in the second half of the twentieth century. If you are in a formal context, these colloquialisms are best avoided!

Although this use of like is widespread, many people see it as an inappropriate choice where we need a conjunction to join clauses.

The rain came down heavily like it was the end of the world. (i.e. as if + verb)

i.e. draws attention to the adjective (often followed by a micropause and rising intonation on the adjective)

It was like so bad I didn’t want to go back.

as a marker for recounted speech (quoting clause)

i.e. indicates that the  following words are not to be taken literally (figurative use of language or hyperbole)

It’ll take like a year for Game of Thrones Season 3 to be out on DVD.

Like how much do you want for the car?

i.e. has no semantic function in the context of the sentence

He came over and like sat down with us.

i.e. a discourse marker (functioning much like um or er)

Can you spot the difference?

The examples below are the like-count of a 20-minute car journey with a teenager … can you describe the use of like in each case?

as = conjunction or preposition

So, think about the context … look at the meaning and the words that come before and after as and like –  then decide whether you need to use a verb, a conjunction or a preposition …

My uncle can plaster a wall he’s a real plasterer.

My friends are working hard for their exams, they did last year.

If you would like more information about as/like and practice exercises with answers, follow the link: WOW 5

(a shortened form of have, typical in informal speech)

So, think about the context … look at the words that come before and after the of or the ′ve , and then decide whether you need to use a verb or a preposition …

I could run faster.

He was tired always being last.

If you would like more information about of /′ve and practice exercises with answers, follow the link: WOW 4

Should it be its or it’s? Is it different to or different from?  When do I use whom? What’s the problem with should of? Why would I write the present is for you and me to share when you and I sounds better? What’s the difference between like and as?

WOWs are Watch Out! Warnings and there will soon be a new WOWs tab at the top of the page. This will direct you to a section with answers to questions like the ones above.

Each page will deal with a commonly misunderstood feature of the English language, using straightforward explanations and examples to clear up the confusion. The aim is to help you make sure that your writing is accurate and that you can recognise non-standard usage.

If there is a particular thing that confuses you, let me know and I’ll add a page!

– if you look at the fact that we now have more people,

that’s men and     women, in work than ever before – that’s a signal that the companies themselves are really more optimistic – they would effectively be de-stocking … their human capital … it’s what they’re not doing – they’re actually hiring people …

– that’s a horrible phrase – you mean sacking people don’t you.

Euphemism can be society’s way of dealing with emotionally difficult or taboo subjects. We do not die, we ‘pass away’; drug addicts have a ‘chemical dependency’; pornography is re-branded as ‘adult entertainment’; contraception is discussed at ‘family planning’ clinics. Equally, euphemism can soften critical judgements: people have ‘ample proportions’ (fat) or are ‘vertically challenged’ (short). This kind of linguistic substitution is based on concealment,  but its aim is not purposefully deceptive – it just makes unpalatable or potentially embarrassing concepts more acceptable.

The problem comes when politics and big business manipulate language for their own gains. When sacking becomes ‘down-sizing’  – or as in this example, de-stocking … human capital – then the linguistic substitutions should set the alarm bells ringing. The replacement of a commonly understood word with something so detached and apparently neutral is intentionally deceptive. It aims to dehumanise the process by reducing people to the level of ‘product’: they have no value as individuals, only as potential capital. Making people redundant therefore becomes less personal – and easier to carry out.

In a military/political context, this deception seems more unscrupulous since it allows those in power to manipulate our response. Important documents have sections ‘redacted’ rather than censored; civilian deaths in military conflict are ‘collateral damage’; a ‘surgical strike’ is a precision bombing; enemies are ‘neutralised’ rather than killed. The language is technical; the connotations are neutral. The effect is to distance us from the true horror of war. This kind of euphemism is often called ‘Doublespeak’ – language that deliberately distorts meaning in order to mislead.

The frightening thing about the use of euphemisms is their power to efface the memory of actual cruelties. Behind the façade of a history falsified by language, the painful particulars of war are lost.

The comments linked to the post on 28 February 2013, ‘Interim – the power of a word‘ are also thought-provoking.