The key to verbs

The section on verbs under the WORD tab is now complete. If you are studying language or want to know more about how language works – this is for you …

It’s really important to be able to recognise and describe verbs, so have a look now!

How many ‘likes’ have you used today?

The like test – do you know you’re saying it?

The colloquial use of like in informal situations is pervasive – try counting how many the people around you use and you’ll find its frequency is high. The question is whether speakers are aware that they are using like – if you don’t know you’re saying it, then you won’t be able to choose alternatives in a formal situation!

And now for the grammatical explanations …

The word like is very versatile: it can be found in different positions in a sentence and it does different jobs.

Earthquakes cause devastation, destruction, pain, suffering and the like.

i.e. resembling something that has already been mentioned

Do you have any particular likes and dislikes?

i.e. things that are preferred (usually in plural)

i.e. the act of showing support for or approval of something posted on the internet by clicking ‘like’

You shouldn’t hang around with the likes of them.

i.e. such a person or thing (colloquial, now usually derogatory)

i.e. what sort of person (expects description in response rather than a comparison)

In the summer, the children all like ice-creams and going to the beach.

i.e. to find something enjoyable (transitive – followed by an object usually in the form of a noun or a present participle)

We always like to run early on Saturday morning.

i.e. to do something as a regular habit (transitive – followed by an object usually in the form of an infinitive)

I should like to know whether the essays need to be uploaded with the application form.

i.e. conditional, implying that the question has no obvious answer

Have you liked the photo of the baby on Stacey’s facebook page?

i.e. the act of registering one’s support for or approval of a post on the internet

A mathematician like you will never be misled by statistics in the news.

The girl’s eyes shone like sapphires caught in moonlight.

i.e. in the same manner as (simile)

So far, so good. The usage of like in each of the examples above is standard. We can add to this list a number of idiomatic expressions:

She looks like a runner. (i.e. to have the appearance of being)

He feels like a take-away tonight. (i.e. to have an inclination for something, colloquial)

I want you to sort out all your computer junk, your old files and the like. (formula to avoid further listing of similar items)

Oh come on. Don’t be like that. (i.e. stop behaving in a negative way)

The essay requires polish, good editing if you like, before it will be ready for submission. (i.e. suggesting something with which others may disagree, formal)

You can borrow my coat if you like. (i.e. making a casual suggestion or an offer)

He’d do it like a shot if he was asked. (i.e. quickly, colloquial)

I was digging like crazy all day. (i.e. in the manner of someone who is crazy)

From here on, we’re venturing into increasingly informal territory – examples of like that linguistic traditionalists may well describe as ‘vulgar’, but which have a high frequency in casual spoken interactions, particularly among young people. You can often trace the origins to American English in the second half of the twentieth century. If you are in a formal context, these colloquialisms are best avoided!

Although this use of like is widespread, many people see it as an inappropriate choice where we need a conjunction to join clauses.

The rain came down heavily like it was the end of the world. (i.e. as if + verb)

i.e. draws attention to the adjective (often followed by a micropause and rising intonation on the adjective)

It was like so bad I didn’t want to go back.

as a marker for recounted speech (quoting clause)

i.e. indicates that the  following words are not to be taken literally (figurative use of language or hyperbole)

It’ll take like a year for Game of Thrones Season 3 to be out on DVD.

Like how much do you want for the car?

i.e. has no semantic function in the context of the sentence

He came over and like sat down with us.

i.e. a discourse marker (functioning much like um or er)

Can you spot the difference?

The examples below are the like-count of a 20-minute car journey with a teenager … can you describe the use of like in each case?

as = conjunction or preposition

So, think about the context … look at the meaning and the words that come before and after as and like –  then decide whether you need to use a verb, a conjunction or a preposition …

My uncle can plaster a wall he’s a real plasterer.

My friends are working hard for their exams, they did last year.

If you would like more information about as/like and practice exercises with answers, follow the link: WOW 5

(a shortened form of have, typical in informal speech)

So, think about the context … look at the words that come before and after the of or the ′ve , and then decide whether you need to use a verb or a preposition …

I could run faster.

He was tired always being last.

If you would like more information about of /′ve and practice exercises with answers, follow the link: WOW 4

And why is that useful? Because we can use language to study questions about human history. That’s what the Radio 4 programme Material World discussed on 28 February 2013.

Evolutionary biologists at Reading University have been looking at the language of Homer’s Iliad so they could work out exactly when it was written. 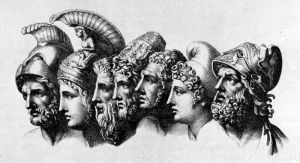 So what did they do?

To find out more – including a ‘precise’ date for Homer’s poem – use the link below :

Scroll through to 22:11 to find the start of the discussion.

Filed under History of language, Uncategorized

The key to open and closed class words

This is where we start … you  first need to be able to RECOGNISE and then DESCRIBE words according to their class.

The first two sections are short and straightforward. They introduce you to open class words and closed class words. These are two very broad categories and all words fit into one group or the other.

Follow the links to read about word classes. Then use the exercises to test your knowledge. Can you spot which words belong to the open class and which to the closed?