The extract below is taken from Bram Stoker’s Dracula, written in 1897. It is the entry in Jonathan Harker’s diary written after his first meeting with Count Dracula. 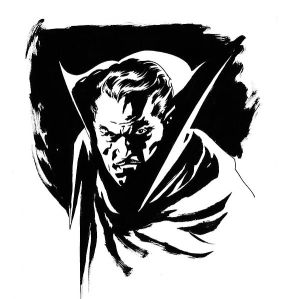 His face was a strong – a very strong – aquiline, with high bridge of the thin nose and peculiarly arched nostrils; with lofty domed forehead, and hair growing scantily round the temples, but profusely elsewhere. His eyebrows were very massive, almost meeting over the nose, and with bushy hair that seemed to curl in its own profusion.

The mouth, so far as I could see it under the heavy moustache, was fixed and rather cruel-looking, with peculiarly sharp white teeth; these protruded over the lips, whose remarkable ruddiness showed astonishing vitality in a man of his years. For the rest, his ears were pale and at the tops extremely pointed; the chin was broad and strong, and the cheeks firm though thin. The general effect was one of extraordinary pallor.

Hitherto I had noticed the backs of his hands as they lay on his knees in the firelight, and they seemed rather white and fine;but seeing them now close to me, I could not but notice they were rather coarse – broad, with squat fingers. Strange to say, there were hairs in the centre of the palm. The nails were long and fine, and cut to a sharp point. As the Count leaned over me and his hands touched me, I could not repress a shudder.

Bram Stoke creates a strong visual image of Dracula here.  The description is designed to alert the reader to key characteristics – but while appearing to tell us a great deal, Stoker reveals very little. He manages to keep his readers guessing.

The adjectives describing Dracula are important:

The most important adjectives, however, have negative connotations:

Many of the adjectives come before the noun they describe (lofty domed forehead) – we call these attributive adjectives. Others, however, are in a more prominent position after was/were (stative verbs).  We call these predicative adjectives. They are interesting because they have a greater semantic significance when they stand alone. Stoker is implicitly drawing our attention to:

The tension between appearance and reality is central. In the beginning, we have to believe Harker’s account; we have to believe that the Count is no more than a foreigner, with unfamiliar customs and habits. In his description of Dracula’s hands, however, Stoker begins to prepare us for an alternative point of view. The stative verb seemed suggests that we cannot trust appearances. It hints at the Count’s potential for deception – his hands betray his true nature.  The image of the hairs in the centre of the palm and Harker’s comment clause Strange to say reinforce the sense that his difference is threatening. And his touch makes Harker shudder.

It is important to remember that while Dracula is a familiar figure in the twenty-first century, contemporary readers will have come to the text with no expectations. Their view of the Count will have been shaped by the limitations of Jonathan Harker’s first person narrative: his blindness will have made them blind. The clues that Stoker builds into this description begin a process of revelation, a process which moves inexorably towards recognition of the Gothic horror of Dracula’s blood-thirst.