The adjectives are printed in red, and then listed according to their position, form and connotations underneath. 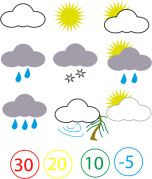 There will be a frosty start in most places, particularly in the north, with icy patches causing problems on the roads. The south will be cloudier with scattered wintry showers and a raw wind. Western parts will get the best temperatures with sunny spells this afternoon. The clear skies tonight will bring the chance of a widespread frost tomorrow.

Rather cold and windy into Thursday with spells of heavy rain and local gales. An unsettled outlook with low temperatures and possible outbreaks of persistent snow in eastern areas. Milder conditions predicted for the end of the week.

PREDICATIVE: cloudier, Rather cold and windy

GRADED: Rather cold and windy

NEUTRAL CONNOTATIONS: frosty, icy, scattered, wintry, Western, sunny,  clear, widespread, Rather cold and windy,heavy, local, unsettled, low, possible, persistent, eastern, milder [these adjectives are used here as part of a ‘technical’ set of words – there is no attempt to create a negative mood]

This text is an example of a weather forecast. The audience is general – it is designed for the public rather than for subject-specific specialists. The purpose is narrow and unambiguous: a description of the expected weather conditions in general regions of the UK and a broad prediction for the way weather patterns may develop. The context is specific since the forecast would appear in a five minute slot at the end of a news programme.

Five key points about the adjectives: